Snow in the Tropics

(← all destinations)On top of the World in Africa: a range of challenges, scale and difficulty (↑ top of page) 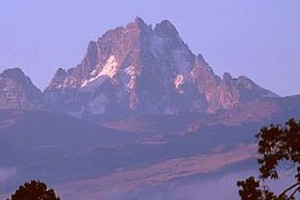 Classical Challenges at all Levels
Kilimanjaro 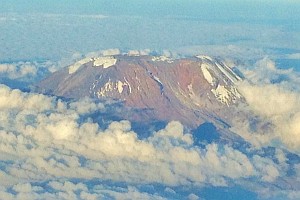 The Roof of Africa
Ruwenzori 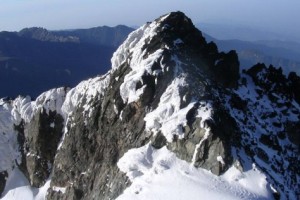 Mountains of the Moon

Naro Moru Route
This is the most popular route although not the most scenic. It is also the fastest route to point Lenana. Easiest route to the top with bunkhouses and good access. The quick ascent can lead to altitude sickness since the distance is 38 km, a duration of 3 days and a High point 4985m at Lenana Point. The altitude gain is 2985m
Day 1: Naro Moru Park Gate - Met Station. 10 km, 3-4 hours, 1000m ascent. The trail ascends from Naro Moru gate to Met Station at 3,050m, possible sidetracks through the Teleki valley.
Day 2: Met Station - Mackinders Camp 10 km 5-6 hours, 1150 m ascent. Continue to climb past the vertical bog up to Mackinders Camp at 4,210m.
Day 3: Mackinder's Camp - Point Lenana Then descent to Met Station 4km, 3.5 hours, 785 m ascent. 14 km, 5-6 hours, 1935 m descent. At about 3.00am start the final push to the summit. This early start will allow you to enjoy the sunrise over the mountains at Point Lenana. Descend to Met Station for overnight.

Kilimanjaro - the Roof of Africa

Kilimanjaro is the highest mountain in Africa with a summit towering 5896m. Situated at the Kenya / Tanzania border, the mountain offers one of the most beautiful sceneries for both locals and visitors, a sight that one never ceases to admire. A further exploration of the mountain by attempting a climb reveals the rich vegetation which consists of cedar, podo and wild olive on the northern and western slopes while, giant camphor, fig trees, ferns lines and epiphytes are a common feature on the wetter eastern and southern slopes.

Kilimanjaro by the Marangu Route - It is a popular one as it combines the beautiful and varied scenery with plenty of opportunities to acclimatise. This is the easiest route to take to ascend Kilimanjaro, the highest mountain in Africa with its two main summits, the craggy Mawenzi, 5149 m, and the 'flat-topped', glaciated Kibo, 5896m. The Saddle, a 5km wide, high-altitude, semi-desert separates the two. From the summit glaciers, screes, cliffs, afro-alpine moorland then forests lead down to the cultivated foothills. The Marangu route takes you at a gentle pace through these dramatically different zones. For the ascent to Uhuru Peak from Kibo Hut a very early start is made since the scree is easier to climb when frozen and the views from the crater rim at dawn can be spectacular. Ski sticks are useful when ascending the scree to the summit. Accommodation on the mountain is in comfortable huts you will require a sleeping bag and mat. This is a tough walking trip but within the limits of a fit individual used to walking in mountain areas. An extra day for acclimatisation to the altitude can be spent at Horombo. From Horombo there are various walks to enjoy.

Day 1; Arrive at the hotel for overnight.
Day 2; After breakfast drive to Marangu Gate. Walk through the rain forest to mandara hut (2743m), for about 3 hours.
Day 3; Leave the forest and cross open moor land to Horombo hut (3760m)
Day 4; Walk through moorland then alpine desert to "The saddle & quot; between the peaks of Mawenzi and Kibo. From here you will walk for about an hour to reach Kibo hut (4730m)
Day 5; Very early start for the summit on steep scree up to Gillman's point (5681m), which is on the crater rim. Continue around the rim (which will take about two hours if you are fit.) to uhuru peak (5895m) the highest point in Africa. Descend to Kibo Hut for tea and biscuits or soup and then down to the thicker air and relative warmth of Horombo hut.
Day 6; Descend to Marangu gate. Drive back to the hotel for a shower, dinner and overnight.
Day 7; Depart after breakfast.

Kilimanjaro by the Machame Route Is also a popular one as it combines the beautiful a nd varied scenery with plenty of opportunities to acclimatise. A steep and fine route providing superb views on the traverse below the Southern Icefields. An extra day could be added to the itinerary, spent either at Shira, where you could walk to the Shira Needles, or camping in the Karanga Valley.The final ascent is made very early in the morning from the Barafu Hut. The Mweka Route is used for the descent. Accommodation on the mountain is in tents; you will need a sleeping bag and sleeping mat. The porters do not pitch the tents for you but will help if you wish. This is a strenuous walking trip but within the limits of a fit individual used to walking in mountain areas. Ski sticks or ice-axe are useful when ascending the scree to the summit.

Day 1; Arrive at the hotel for overnight
Day 2; After breakfast drive to Machame village. The climb begins at the end of the tarmac road. Walk through shambas then forest to the Machame hut (3000m, about 6 hours).
Day 3; Continue along the steep ridge going on to rock ridges and through heather. The route turns west into a river gorge, reaching Shirahut at 3800m, 5 hours
Day 4; Continue east towards Kibo passing the junction, then east towards the Lava Tower. Shortly after this, you reach Barranco hut (3940m, 4 hours).
Day 5; A short scramble to the top of the Great Barranco and then a traverse over scree and ridges to the Karanga Valley (4000m, 3 hours), beneath the icefalls of the Heim, Kersten and Decken Glaciers. After climbing out of the Karanga Valley the trail ascends a ridge to the Barafu Hut, a bleak location with little vegetation at 4600m, (3 hours walking).
Day 6; An early start for the ascent to the rim of the Kibo Crater between the Rebmann and Ratzel Glaciers, (4 hours); the last section before the rim can sometimes be snow-covered and an ice-axe or ski stick is useful for balance. From here a further hour leads to Uhuru Peak, from where there are often fine views of Meru to the west and the jagged peak of Mawenzi to the east.
Day 7; Descend to the Barafu Hut for a rest and lunch before continuing on down to camp at Mweka Hut in the giant heather zone on the forest edge. Those with energy on the summit may wish to descend to the Reutsh Crater and visit the dramatic ice pinnacles of the Eastern Icefields.
Day 8; A 3-4 hour descent through beautiful forest brings you to the park gate and your waiting transport. Drive back to the hotel.
Day 9; Depart after breakfast.

Variation: Machame route then Uhuru Point by Arrow Glacier This is a really steep, hard but short route to the summit from Arrow Glacier Camp. From December to February crampons and ice axes may be needed.
>

The Rwenzori Park is a splendid world of ice and snow, with its massive ice-rime sculptures and mind-boggling vegetation, and arguably surpasses other afro-alpine areas in its beauty, wonder and interest to mountaineering enthusiasts. This park, covering 996 sq. kms. provides a magnificent environment for both experienced climbers and casual day hikers. These legendary mountains exhibit spectacular scenic beauty and provide a unique habitat for many rare and indigenous plants and animals. The Highest mountain in the range, Mt. Stanley, is the third highest in Africa after Mt. Kilimanjaro and Mt. Kenya. Its highest peak, Margharita, rises 5,109 m above sea level. The giant lobelia and the groundsell are hallmarks of the Rwenzori. All of the above make this park an unforgettable visitor destination.
Decreasing temperature with increasing altitude have resulted in marked zoning of vegetation, which is of great interest to scientists and a delightful experience for visitors. In fact, more people visit the Rwenzori to explore and experience the fascinating vegetation than to climb the peaks and glaciers.
The usual trip lasts not less than 6 days, just long enough to hike the Central Circuit Trail. Longer and shorter trips can be arranged. No special climbing equipment is necessary unless you intend to climb one of the summits. However, hiking the trails is arduous work, and weather conditions are unpredictable and rainy. The driest months are July, August and December, January and February. Hiking should be undertaken only by the physical fit.

Day 1 Kampala - Mbarara. Arrival at Entebbe airport. Transfer to Kasese via Mbarara for lunch at the Lake View Hotel. The journey takes you along the Lake Victoria on a good road to Mbarara. From here, the landscape charges to a hilly and fertile area with tea and banana plantations. Dinner and overnight at the Margarita Hotel.
Day 2 Mbarara – Nyabitaba hut After breakfast, short drive to Ibanda (1,600m), the starting points of your Ruwenzori climb. After brief introductions to the crew, your trek; which takes 4 hours starts taking you along the Mubuku River to Nyabitaba Hut (2,650) where you will spend the night.
Day 3 Nyabitaba Hut – John Matte Camp. After breakfast, cross the Mubuku River; one of the highest sources of the Nile, on a rope bridge and continue walking along the river to the Nyamileju Hut for lunch. You then continue to your trek stepping at the base of the mass tussock grass to avoid getting stuck in the rather wet ground. After about 7 hours walking, you will have reached the John matte Camp where you will spend the night.
Day 4 John Matte Camp –Bujuku Hut Today's trek takes you up and down a cliff crossing the river severally along the Bujuku valley. The ground is permanently wet and muddy. After 5 hours, you reach the Bujuku lake where the scenic forest become bigger and bigger. After a short break, another hour's walk takes you to the Bujuku Hut (3,977-m) where you will spend the night.
Day 5 Bujuku Hut – Kitandara Hut. Continue your hike this time walking towards the Kitandara Hut (4027 m). Today's walk is much similar to the previous day as you walk up and down cliffs using roots tussock grass for support. The last bit of your trek is by ascending the Scott - Elliot saddle (4372m) and descending again to the Kitandara Lake before proceeding to Kitandara hut for dinner and overnight.
Day 6 Kitandara Hut – Guy Yeoman Hut. Today's walk takes you via the Fresh field saddle (4280m) passing Bujongolo cave to Mubuku Gorge. The walk takes about 8 hours. Overnight will be at the Guy Yeoman Hut (3450m).
Day 7 Guy Yeoman Hut – Nyabitaba Hut Descend to the Mubuku valley passing very steep water falls through a bamboo forest. Overnight will be at the Nyabitaba Hut.
Day 8 Nyabitaba Hut – Hotel Margarita. Descend to Ibanda where vehicles will be awaiting to take you to Hotel Margarita for dinner and overnight.
Day 9 Hotel Margarita – Kampala Drive back to Entebbe with lunch on the way for either return flight or connect to your Mt. Elgon climb with our Elgon Cross over package.